How Shocks and Shock Valving Works

Note: If you wish to skip the basics of how shock valving works and go straight to shock tuning, please see our Shock Tuning Guide.

Most high performance shocks are similar in design and feature a piston attached to a shock shaft that moves up and down inside the shock cylinder which is filled with shock oil. Shims placed on either side of the piston, then control the movement of oil through the ports depending on their arrangement. 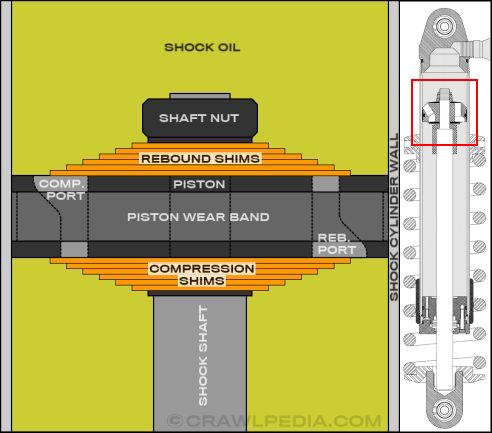 As the shock shaft moves within the shock body, oil is forced through openings in the piston to push against the shim stack on the opposite side. The faster and harder the shock moves, the higher the force of the oil pressing against the shims becomes. Controlling how much force is needed to allow the oil to move past the shims at any given speed is how shock valving is determined.

NEW! - Need help with shock tuning? Check out the new comments section below!

Shock valving shims are precision machined in various thicknesses and are heat treated to hold up to temperatures exceeding 500 degrees without losing strength. The most common configuration is a pyramid style stack made up of progressively smaller diameter shims which offers excellent damping at all speeds. The harder and/or faster the shock moves, the higher the force of oil being pressed through the shock piston ports gets and the more shims in the shim stack come into play. As more and more force is applied to the shock, the harder the shims press against the oil to dampen the movement.


An important thing to keep in mind is that all forces absorbed by the shock absorber are converted to heat which is dissipated through the shock oil and out through the shock body. Every shock absorber has a limit to the amount of force it can absorb over a given period of time before the heat generated causes the shock oil to break down or expand to the point of cavitation where the piston hydro-locks. This is why it is not only critical to get the shock valving correct, but to also make sure that your shock is the appropriate size and properly equipped to match the performance of the vehicle.

For one-on-one help selecting the right shocks and valving for your vehicle, contact the team over at Filthy Motorsports.

This shock valving guide is ©Copyright Crawlpedia.com - Do not repost or reprint without written permission.


Other Shock Valving and Tuning Resources

Want to see your banners and links on Crawlpedia? It's easy, affordable and very effective, just contact us to get started!

To find the street legal laws for your state including maximum suspension lift heights and tire size rules visit LiftLaws.com