Note: Before reading about shock tuning, please read our Shock Valving Guide to understand the basics of how high performance shock valving works.

Without getting too advanced, shock tuning is about selecting the right combination of compression and rebound shims and stacking them in the proper order to get the shock damping characteristics you are after.

While shock tuning is as much of an art as it is a science which takes a lifetime to master, basic shock tuning is quite simple and something any off-road enthusiast can do. 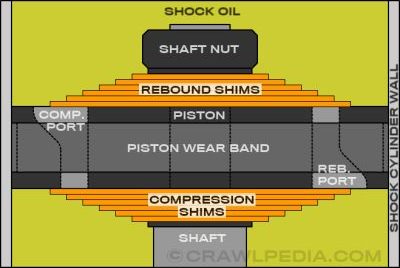 As is covered in our Shock Valving Guide, every shock features two shim stacks: one for the compression tuning and one for rebound tuning. (Remember that the shims are placed on the opposite side of the piston from the direction of travel.)

The most common shock valving configuration (standard valving), is a progressive shim stack, or pyramid shim stack made up of 5 to 10 shims of the same thickness and varying diameters stacked in order from largest to smallest.

Shims come in various thicknesses and are measured in thousandths of an inch. The thicker the shims are, the less they want to bend, thus making the shock stiffer.

When referring to the valving specifications of a shock, you simply list the shim stack thickness as "compression over rebound". For example, a shock with .015" compression shims and .012" rebound shims would have "15/12" valving.

Note: Not all shock manufacturers use this exact terminology and shock valving numbers are not always interchangeable.

The standard pyramid style shim stack is the most common configuration for a reason - it works very well. It gives the shock progressive damping which allows it to be relatively soft during slow speed movement like rock crawling or driving around town and stiffer at higher speeds like blasting through the desert or hitting a pothole on the highway. This is why a standard progressive shim stack is the way to go most of the time.

For example, a 2.5 PR Series King Shock with standard 12/15 valving would have the following shim stacks:

Another advantage of standard shock valving in this structure is that it is very easy to adjust. If the shock feels too soft, use thicker shims and if it's too stiff, use thinner shims. King offers shims in .08", .010", .012", .015", and .020" thicknesses and they are all readily available on-line at Filthy Motorsports. 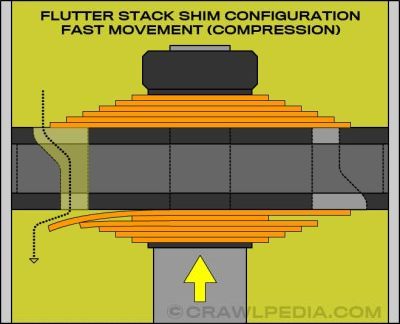 A flutter stack is a configuration were a smaller diameter shim (gap shim) is placed between two larger diameter shims, usually on the compression side and within one or two shims from the piston face.

Inside the shock, a flutter stack increases the distance that the largest shim(s) has to move before it contacts the stiffer shims above it. This gap extends the "soft" zone of the shock and the more thick the gap shim is, the larger that zone becomes.

In a real world application, this would allow your suspension to better soak up high movement, low force terrain like a washboard while still absorbing big hits when they happen. (A secondary bypass shock, however, would normally be better choice for this application though.) 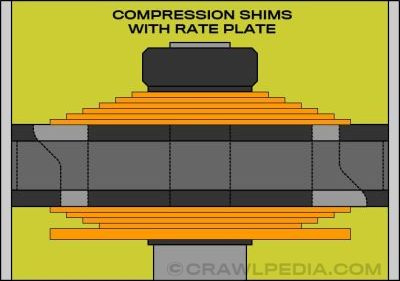 In contrast to a flutter stack that extends a flow zone, a rate plate does the complete opposite by setting a dead stop, similar to a door stop. This sudden stop makes for a dramatic change is shock valving which works well in some applications but is often reserved for racing as it can be very difficult to get right.

Rate plates are almost exclusively used on the compression stroke of the shock and are nothing more than an extra thick, non-flexible shim. The fewer shims there are between the rate plate and the shock piston, the faster it comes into play which is why they are most often placed near the top third of the stack

Because rate plates don't flex, they create a (practically) linear damping force that is predictable and makes pairing them with secondary shocks and tuning bypass shocks easier in advanced setups.

For extreme and heavy vehicle applications like mud trucks and monster trucks where .020" shims might not be enough, doubling up on the shims or every other shim ("x2") is one option that will add damping force.

While this is usually only done with .20" shims, it will also work in situations where thicker shims aren't available but two thinner shims are at hand. Keep in mind that two .010" do not act the same as one .020" shim, and will be a bit softer.

A major drawback to doubled up .020" shims, however, is a significantly increased temperature since the shock is working harder. For mud trucks and monster trucks that run 20 minutes at a time, this isn't much of an issue but desert race trucks would be far better off upgrading to a larger shock body or adding a secondary bypass shock.

In some high speed racing applications the tires need to extend quickly to keep in contact with the ground so rebound valving is removed or significantly reduced to make the shocks a compression only damper. This is called pop-off rebound valving and is most often seen in coilovers that are paired with larger bypass shocks.


*While some shims are interchangeable between brands, their valving characteristics are different.

This shock tuning guide is ©Copyright Crawlpedia.com - Please provide a link back to this page when copying.
Data is accurate to the best of our knowledge and is offered as-is with no guarantee.